There has been a lot written and discussed about why we are motivated to go out and take pictures of nature – after all its a pretty pointless exercise in the most part. It perhaps satisfies a natural ‘hunter’ instinct in us – particularly for blokes! There is a sense of capture, something tangible to bring back and show to people – a trophy if you like. We can recount our experiences through words and this is an equally influential medium but a picture is somehow more real and can now be shared very easily and quickly through the internet. Once images have been secured there seems to be an almost irresistible urge to get back home and upload them onto online forums, blogs, Facebook and Twitter for the whole world to see. And even this may be too tardy a response for some – with images being beamed across the globe from mobile devices whilst still poised to capture the next trophy. Its all very bizarre but there must be something within the human psyche that makes many of us do it (although I haven’t got to this latter critical stage just yet!). There is of course more than an element of ego involved here and who isn’t bouyed by positive comments about their images from friends, colleagues and very often complete strangers through social networking sites? Should I really be bothered by what someone I have never met or even know thinks about my pictures? The point is I am but I don’t know why!

Anyway, I digress somewhat because I was going to talk about what motivates me to go out and take pictures and I think – although I’m never 100% sure about this – its because of the positive feelings that close contact with nature brings. Now this all sounds very woolly and unmanly but I always feel a lot more positive about things generally when I’ve been out in the field either taking pictures  or watching and experiencing what I hope to take pictures of in the future and of course all those things that I see but which I’ll never get even close to photographing.

A case in point. I was out yesterday morning in a part of Abernethy Forest that I have never been to before, shooting pine forest material for 2020VISION. This was the motivation and reason for being there but photographically it was a rather frustrating experience. Clear skies loomed above me but all around the horizon dark clouds threatened rain – potentially perfect conditions for landscape photography except that the sun was obscured by cloud for all but 60 seconds of the 2 hours following sunrise. By the time the sun did break through that warm early morning light had gone and some of the magic was lost. But standing, waiting on a boggy patch of moorland – with a wet foot having misjudged a ditch crossing – I was aware of a bird song with which I was not familiar. I tracked the song down to a bird stood atop a stunted pine tree but without binoculars I couldn’t make it out. Instead I took a shot of it with my 200mm lens – it was a mere pin prick in the frame but blown up on the LCD screen I could just make out that it was a wader. In fact it was no ordinary wader – it was a wood sandpiper, a very rare breeding bird within the UK (they usually breed on the tiaga of Scandinavia) that would quicken the pulse of any keen birdwatcher. After a while it rose into the sky and performed a song flight. A second male joined it, both birds displaying high over their breeding grounds. Magical and something I had never previously seen. 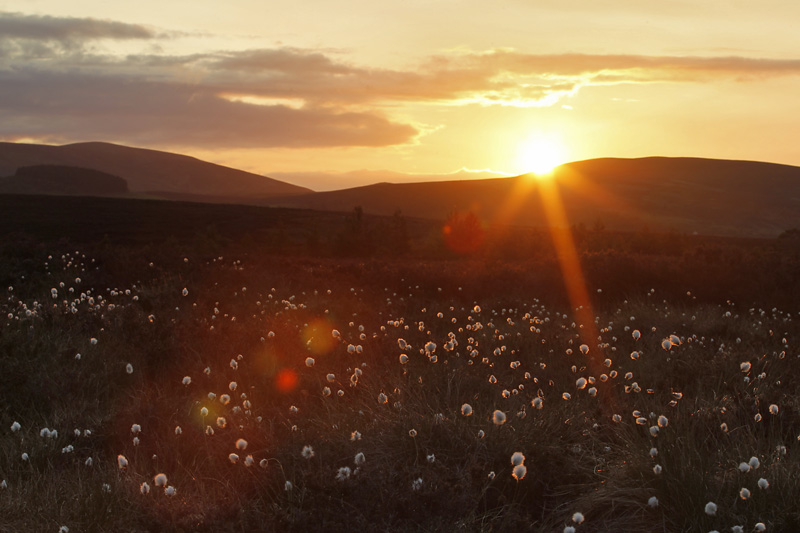 Earlier, I had been eyeing up a potential shot of the dawn sky reflected in a small pool when something that sounded like a galloping pony thundered past within a couple of metres behind me. I turned just in time to see a large – possibly male – otter run by and belly flop into the pool 15m away. It surfaced once, probably to check me out and then disappeared into the reeds. Wow! My heart was racing – it was totally out of the blue and not a species I would have expected to see in that kind of environment. I checked the ‘path’ through the heather on which it had traveled and found a fresh spraint – it had obviously been this way before quite recently, so probably a favoured feeding spot. 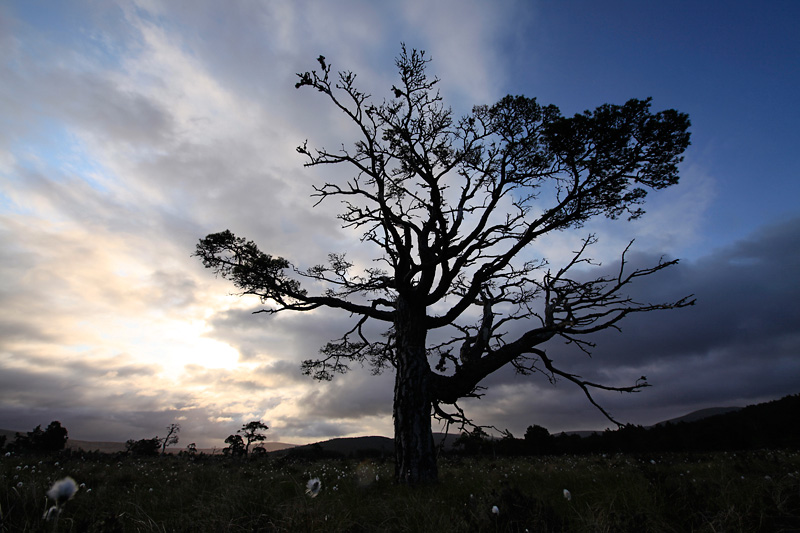 Eventually, after trying a few time lapse sequences of weathered pines, I headed back through the forest disturbing a small flock of crossbills on the way – a bogey bird for me and one I have never photographed. It had been a rewarding morning, topped off by a fry-up after stopping off at the local butcher’s. There were no trophies to show for my efforts but the two wild encounters more than made up for that.

Did you like this? Share it:
Tweet
This entry was posted in In the field and tagged 2020vision, abernethy, landscape, nature, photography, wildlife photography. Bookmark the permalink.