The past few weeks have been exceptionally busy trying to juggle 2020VISION office work with several photographic assignments. This week alone I’ve photographed hen harrier, white-tailed eagle and black-throated diver and have spent a total of 59 hours in various hides. And I have the bruises to prove it! But its been great – really great and it’s what nature photographers live for – extended time out in the field in the company of wildlife. 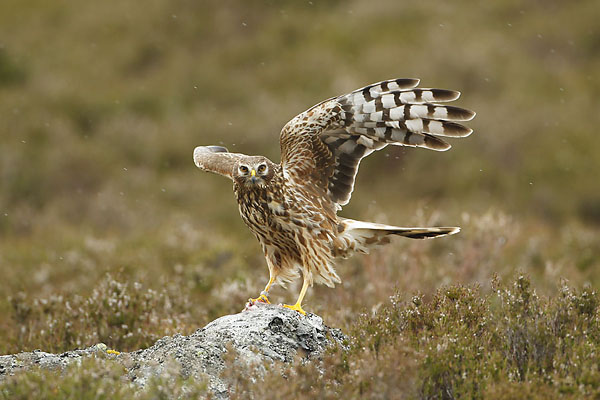 I started work on the harriers in mid-June in collaboration with Glen Tanar Estate, who incidentally have the only known pair of breeding harriers in north-east Scotland. I met up with Colin Maclean from the estate on a typically damp morning and we headed up a long steep land rover track deep into the hills. A patchwork of heather moorland extended in every direction for this is prime red grouse country and most of the estates on Deeside provide grouse shooting as part of their activities. And for this reason alone, harriers in particularly are not welcomed, such is their penchant for taking young grouse especially when they have hungry chicks to feed. 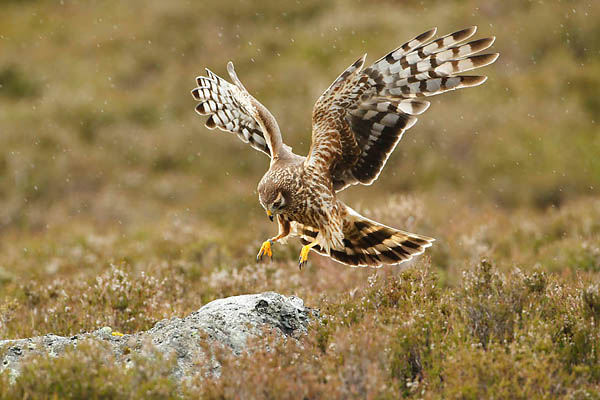 So, it was very refreshing to talk to Colin about the Estate’s more pragmatic approach to dealing with what is most often perceived as a ‘problem’. It may be ‘just’ a single pair of harriers on the estate but even this can make quite a dent in the red grouse population during the course of a breeding season. To try to alleviate some of the grouse predation, and at the same time turn the presence of the harriers into an attractive ‘product’ for photographers, Colin has been putting out chunks of venison (also from the estate), which the female has been feeding to the chicks. As the larger bird of the pair it is often the female that predates the most grouse, and so by providing this supplementary food supply her hunting forays are reduced, and so then is the impact on valuable grouse stocks. 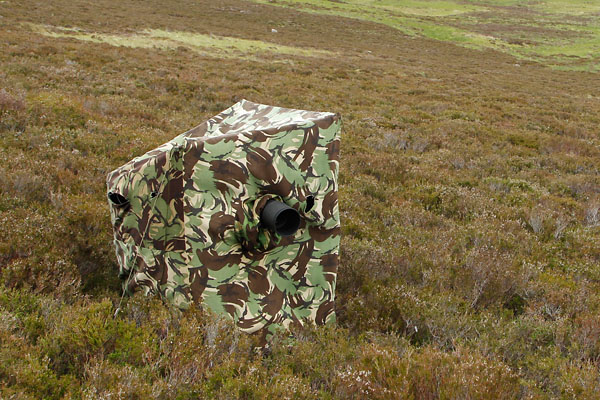 Arriving at the site, Colin already had a hide in place. At which point I should mention that this was provided by my colleague Pete Cairns and I should have known it would have been in less than favourable condition. And indeed it was. One pole was jammed at half height and another wouldn’t lock into its full height position, which left just two poles at 5 feet and two at 3 feet and a hide barely fit for purpose. The prospect of spending 12 hours with my head jammed against the roof of the hide, bent double trying to look through a two inch opening for an approaching bird was not very inviting! Don’t worry I’ll get my own back sometime! 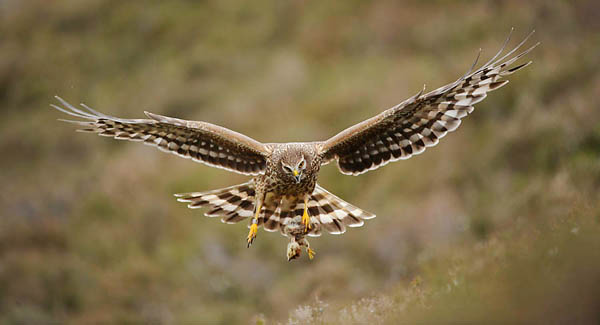 The nest itself was out of view  in deep heather where there were four well grown chicks already partially feathered up and starting to flap about as they strengthened their flight muscles. My job was a simple one in theory – to photograph the female as she approached the nest. However, I knew from past experience with harriers that they often sneak into the nest quickly and from any direction so vigilance on my part was paramount. With the female in my sights I could keep track of her movements but I’d lose her every so often, which brought about mild panic, constantly checking each of the ‘port holes’ to try to spot her approaching. Several times I missed her and she dropped in unexpectedly. With a bird that feeds every few minutes like a blue tit this is no big deal but with a harrier that only feeds every hour or so each missed opportunity means another long wait for the next chance. 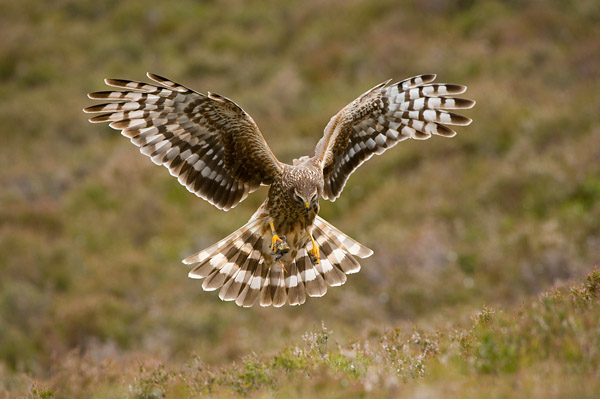 After the first day I had secured some successful shots of the female coming into the nest so job half done. The next morning I slipped into the hide at 0415 so as not to disturb the female from the nest. During the morning both the male and female were hunting well bringing in 7 items of prey between them – a mix of pipits and grouse (both red and black). At midday Colin returned along with Roy Dennis who had come to ring and fit satellite tracking devices to the chicks. This had been very successful last year in tracking the birds movements, with one bird returning to Glen Tanar Estate in spring having roamed widely . This progress of this year’s chicks (and other raptors) can be followed on the Raptor Track web site. 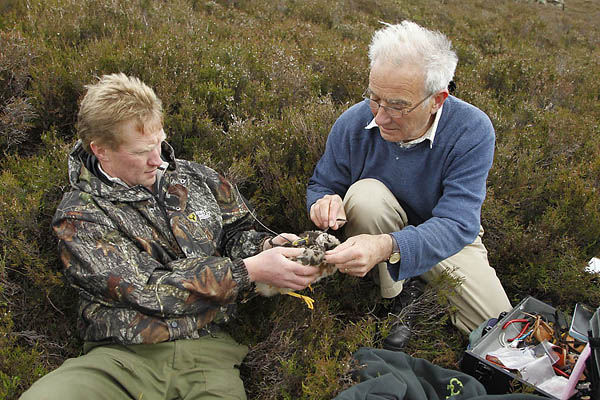 On leaving, Colin left some venison on a nearby rock hoping that the female would take it for the chicks and provide me with some different shots. Back in the hide I didn’t have to wait long and as soon as Colin and Roy were out of sight, the female honed in on the food. By now the day had turned from clear blue sky to a heavy drizzle but the light remained good and I enjoyed a frantic few minutes of photography as they female returned to the rock several times in quick succession. Once the food was gone things quietened down and with the rain getting heavy, the female settled down to brood the chicks and I sneaked out the hide and headed for home eager to see the results. 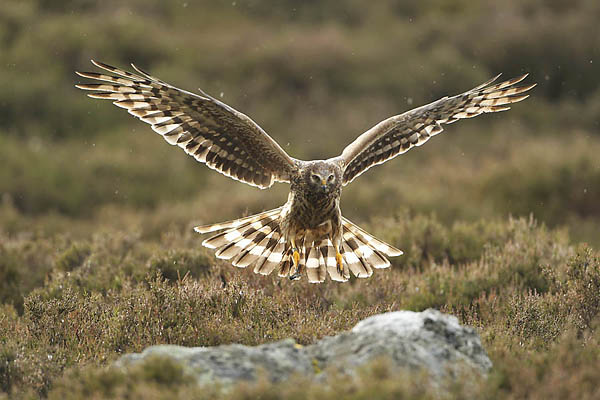 Did you like this? Share it:
Tweet
This entry was posted in In the field and tagged 2020vision, colin maclean, glen tanar estate, hen harrier, hide, photography, wildlife. Bookmark the permalink.