Matters of the universe, space and other ‘unearthly’ goings on are, for the most part, well beyond my levels of comprehension. I guess I’m not alone on that one. I find programmes like ‘Wonders of the Universe’ currently showing on BBC, fascinating but when ‘the Prof’ starts talking about other sun’s that are millions of light years away it makes my brain hurt! We all seem fascinated by the ‘goings on’ beyond our own small world and especially so, for me anyway, those natural phenomenon that we can actually see and experience first hand without the need for the Hubble telescope. It sounds daft but I still really enjoy seeing the rising or setting of the sun or a full moon. Everyday occurences – well less so if you live in northern Scotland or indeed Finland in winter! 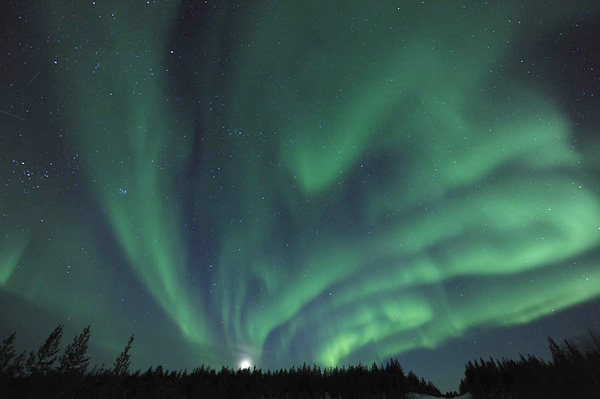 Which brings me finally to the main topic of this blog – the Aurora Borealis or northern lights, which I recently had the pleasure of seeing first hand in Lapland in northern Finland. I had seen the Aurora Borealis a couple of times in Scotland around 2002 or 2003 when there was an especially good display that extended down into northern England, but more typically you have to travel much further north to get reliable and brighter displays. A friend contacted me about 2 months ago and said that he was setting up a new business called Aurora Hunters and would I like to help him leading photography trips in Finland. Needless to say my ears pricked up when he mentioned that he had a few spare days and I was welcome to join him for a spot of Aurora hunting! 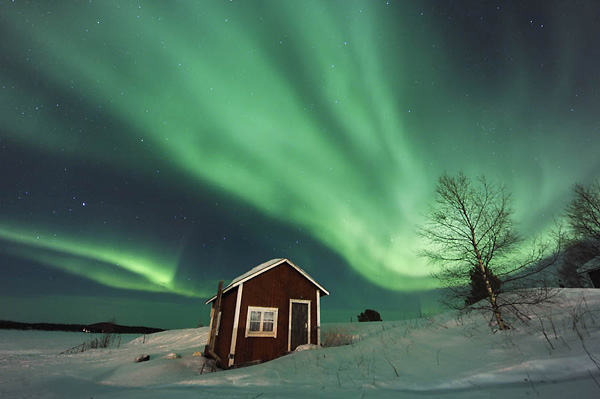 A couple of weeks later I stepped off the plane at Inari airport into freezing conditions and blanket snow –  the first daffs of spring back home seemed a long way away! We headed out of the airport with the intention of grabbing a quick pizza back at Andy’s flat but we had only gone about 15 miles when the Aurora struck. In fact I hadn’t noticed it to be honest but when Andy turned down the lights of the car it was clearly visible and even more so once we stepped outside. Still in my ‘travel wear’ – i.e. thin trousers and a T-shirt to avoid heat exhaustion at the airport terminals – I strode off into the snow armed with a tripod and my shiny new Nikon 14-24mm lens. A few steps later I was thigh deep in the stuff and my boots were quickly filling with melting snow. Ah well it would be worth it if only I get those blasted telegraph poles out the shot. Several minutes later and only about 10m further on I set up camp and banged off a few frames not really sure what I was getting. 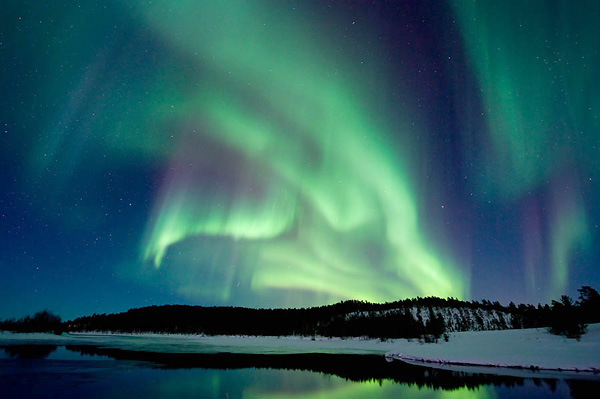 Meanwhile the aurora was developing very nicely on the other side of the road. S*** and b*******!! Another herculean effort ensued and I was back standing behind the car from where Andy had not moved and who was smiling broadly at my attempts to wade through ‘treacle’. The moon was just setting and bands of green light swept across the sky – I needed the 14mm just to get most of it in the frame. We continued to shoot until it faded and then returned to town to pick up two other guests and then back out into the dark to continue our quest. The rest of the night didn’t disappoint with some amazing displays of lights dancing across the sky on into the early hours. We finally had the pizza at 0230!

P.S. Hoping to lead a few trips to Finland in November 2011 and January 2012 so if you fancy some Aurora photography drop me a line to register your interest.

Did you like this? Share it:
Tweet
This entry was posted in In the field and tagged aurora borealis, finland, landscape photography, northern lights, winter. Bookmark the permalink.