Nothing to grouse about

Black grouse or blackcock is a species with which I have a love-hate relationship. For the most part I love them. The hate bit comes in when the alarm goes off in the middle of the night and the last thing I want to do is get out of bed and drive for an hour and then stomp across a wet moorland in the dark to sit in a cold hide. It just isn’t very appealing and no one with any sense would do such a thing but then these people perhaps don’t know what they’re missing. To witness blackcock strutting their stuff on their display grounds (lek) at dawn is undoubtedly one of the greatest birding spectacles Britain has to offer. It is raw and often very aggressive animal emotion as males defend their turf near the centre of the lek where watching females eye up their suitors and eventually offer themselves for mating. Only the fittest, strongest males win this ‘right’ to mate whilst less able birds and younger males can only watch on the sidelines. It is really is dog eat dog out there. 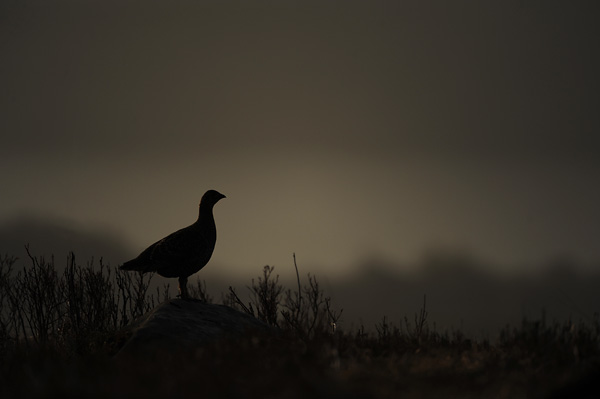 I have photographed blackcock many times over the past few years and you would have thought that I would have got what I wanted by now. After all how hard can it be? Well it is actually quite hard – not necessarily to get good shots but to get something a bit different – and the opportunity for actually taking pictures is short because of the low light conditions when they are displaying most vigourously. The birds arrive on the lek about 1 hour before sunrise at which time it’s just their white tail feathers that are visible in the gloom. I usually start to mess round with some very slow shutter speed work (1 – 2 secs) fairly early on using high ISO settings but generally the results are all throw-aways but now and then something ‘arty’ pops up but it does take a bit of imagination to work out what’s going on in the picture! The advent of low noise, high ISO shooting is a real godsend though for blackcock photography and useable images can now be obtained at ISO3200. 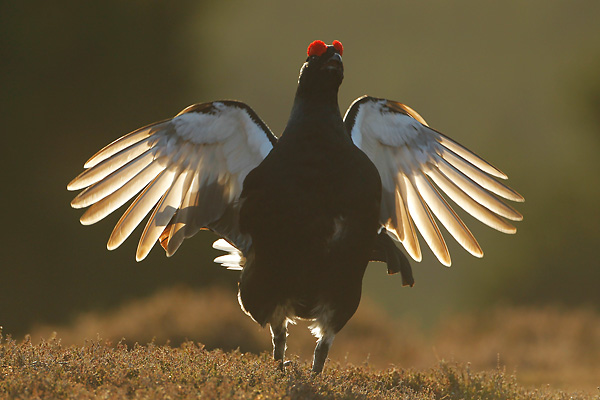 The position of the lek I have been working is such that its possible to shoot from almost any position -n front lit, back lit, lying down etc. so there are really limitless possibilities. After a couple of ‘regular’ sessions, which didn’t really yield anything I hadn’t got before, I tried using my low level hide to get a different perspective. This produced some good results but I had to be content with photographing just two of the birds as the others were in a bit of a dip and out of view. The following week the weather was settled with clear cool nights and so I wanted to try to get some back lit images that would hopefully show up the bird’s breath when they called. By shooting into a dark hillside opposite this worked pretty well and I was pleased with the results. I tried again the following morning but this time it was hazy and warmer and there was no breath visible. It’s always a bit of a risk photographing this way because if the intended shot doesn’t come off then the light is very quickly too harsh to shoot ‘regular’ material and you come away with nothing. 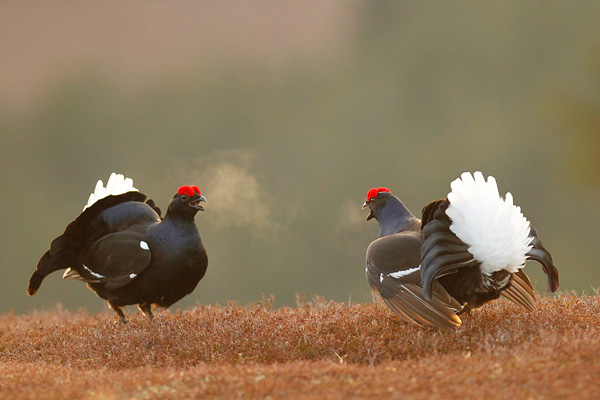 A day or two passed before I went back again, once more setting up for backlit images. It was a cold morning with a slight frost – ideal conditions – and soon a mist was moving up the valley adding further to the dramatic conditions. I knew that once the sun rose, this mist would begin to glow orange and would provide a fantastic backdrop for the grouse. The only concern was having two males squaring up to each in the right place at the right time in what would only be a 5-10 minute window. Individual blackcock always take up the same position on the lek and fight in exactly the same spot every morning so I knew that two of the males would fight in a good position although they didn’t do it very often. Sure enough as the sun came up over the far hill the lek was bathed in glorious light coming through a veil of mist. A few minutes passed and the males remained in their respective positions but not where I wanted them. Then all of a sudden their activity cranked up 10 fold as a female flew overhead calling as she went and landed just outside the leking arena. The presence of a female always sparks a frenzy of activity as males vie for attention – leaping high into the air performing elaborate ‘flutter jumps’. 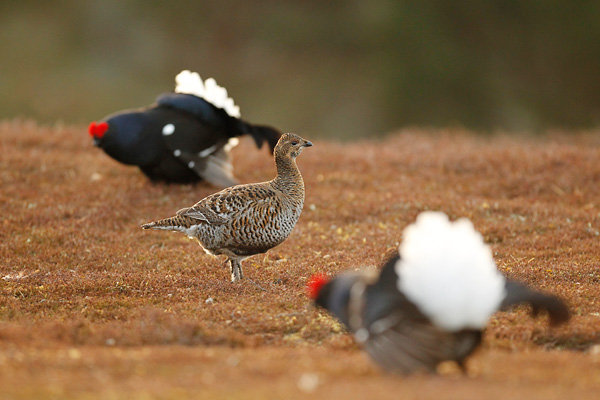 A female is always worth fighting over too and, just in time from my point of view with the light still optimum, two males moved into the ideal position and engaged in a few seconds of fighting activity. It was all over very quickly but it was long enough for me to capture the shot I wanted. But have I ‘done’ blackcock? – have I heck and I’ll be back again next spring – I can’t wait! 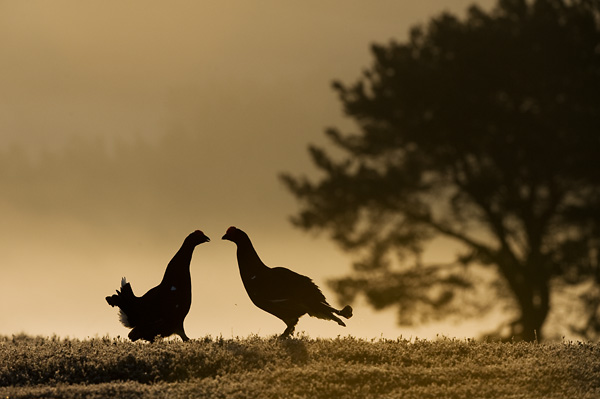 Did you like this? Share it:
Tweet
This entry was posted in In the field and tagged black grouse, blackcock, lek, photography, scotland, wildlife. Bookmark the permalink.

5 Responses to Nothing to grouse about