After a long day’s traveling, the jagged peaks near Svalbard’s ‘capital’ Longyearbyen lay beneath me as we made our approach to the airport. It was close to midnight but the sun was still up bathing everything in its path in a beautiful golden light. The ‘sign post’ outside reminded me of how I had come in the past 16 hours and the mounted polar bear inside the terminal that overlooked the baggage carousel of what was hopefully to come. For now bed beckoned although a midnight flight for aerial photography was very tempting! 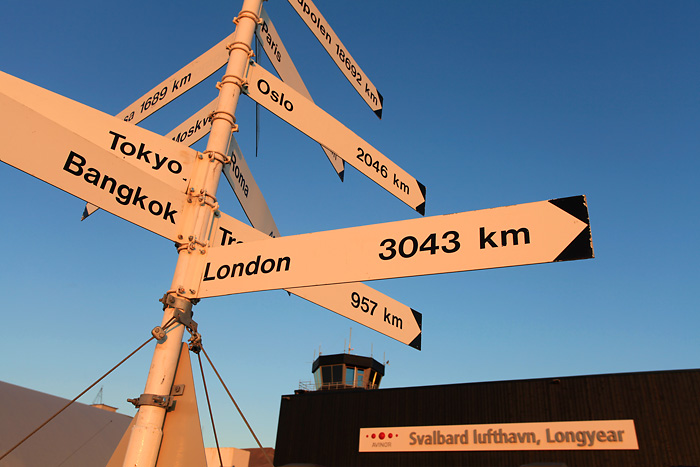 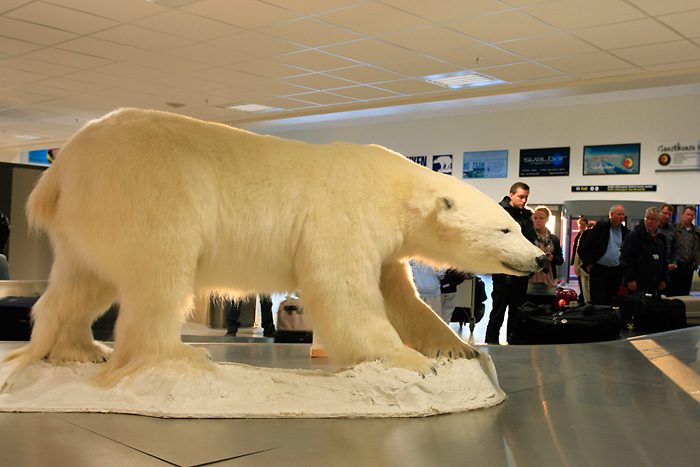 Our voyage aboard the Origo began the following afternoon and along with the Northshots tour group we headed north up the west coast. A full day’s steaming lay ahead but whilst the sun lasted the following fulmars provided some photography. 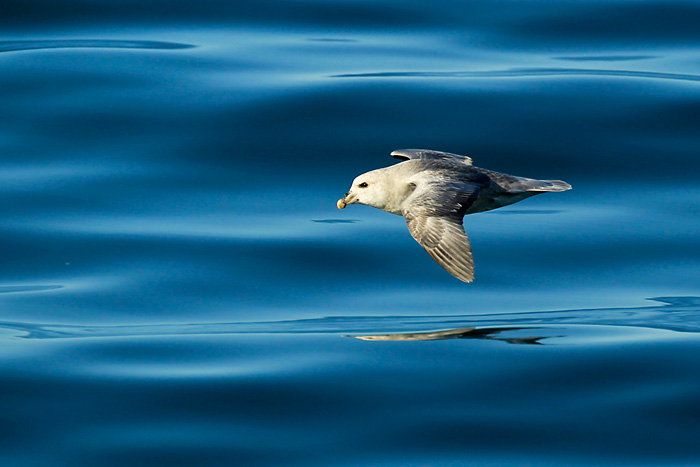 By early Sunday evening we had reached Lagoya, an island off the north coast and home to a sizeable walrus colony that we reached by Zodiac. The light was mostly overcast but a thin strip of clear sky near the horizon promised better light. The mass of bodies made it difficult to isolate an individual or compose a shot but when the sun finally broke through things improved and we enjoyed about 15 minutes of great light both for the walrus and the nearby arctic terns that entertained us with their mid-air squabbles and occasionally alighting close-by. 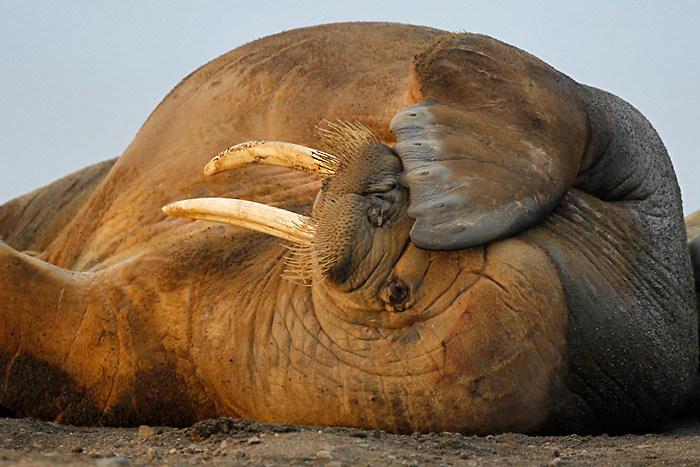 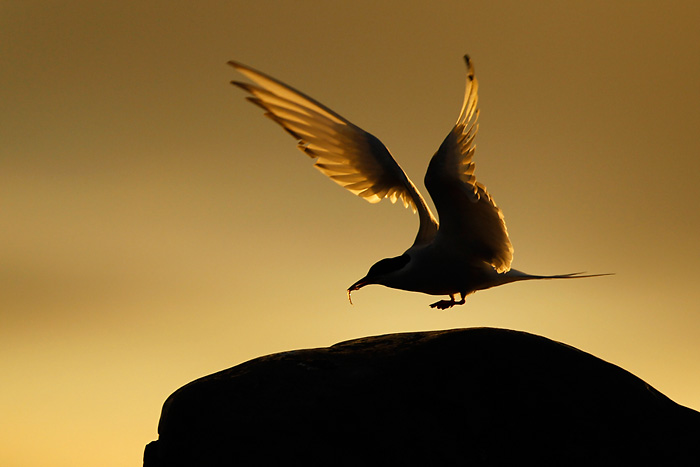 With the drift ice unusually a long way north we continued on, passing 81º we no ice in sight. Finally, we found a narrow finger of ice that we entered in our quest for polar bears. These nomadic hunters travel great distances on the drift ice as they search for the main prey of seals but finding them is another matter. They spend much of the day sleeping, curled up in a ball making them a challenge to spot even in good light. Throw in the element of fog and spotting a bear becomes a game of chance. Fortunately, the weather was holding for now and our decision to follow the drift ice paid off with the sighting of a male bear. 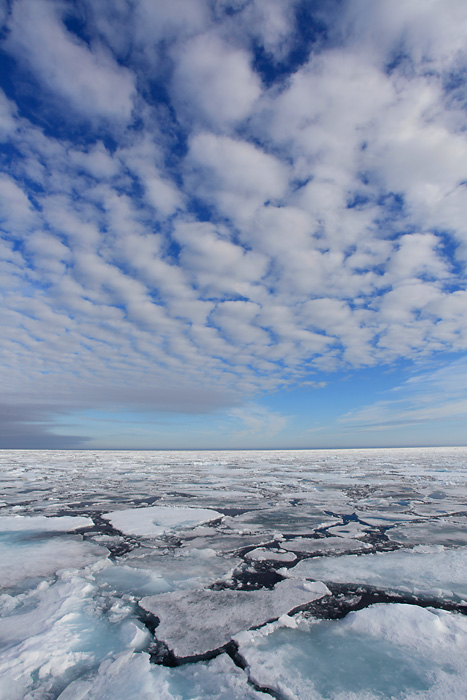 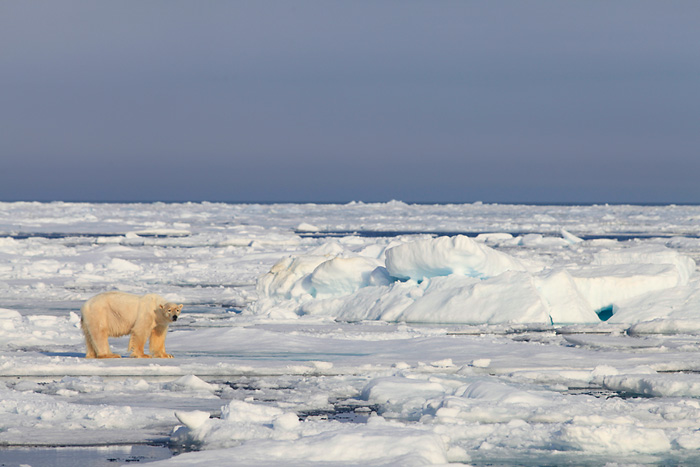 Up close, he looked old and weary and it was clear that he was not in the best of shape. It was our first bear and naturally everyone was keen to get some shots but we soon moved on. 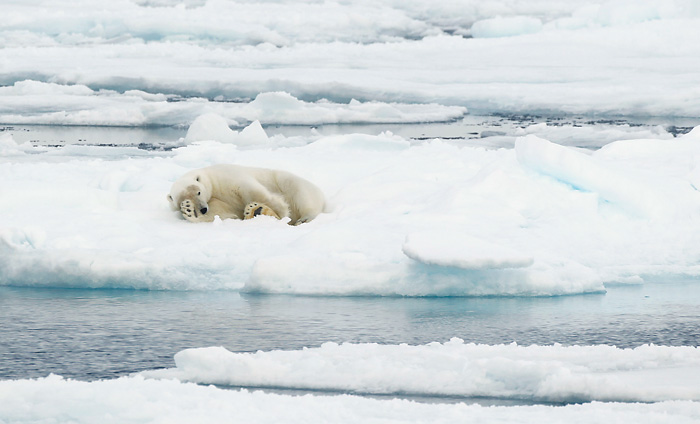 A few hours later a distant ‘off-white’ blob on the ice gave us hope of another bear and sure enough our hunch was correct. It was another male but larger and looking much more healthy. Thankfully, he hung around for quite some time and gave everyone some great opportunities. We were equally lucky with the light, with a great sky that lent itself well for wider shots of the bear in its arctic environment. It was a ‘2 bear day’ – not bad for our first day in the ice. 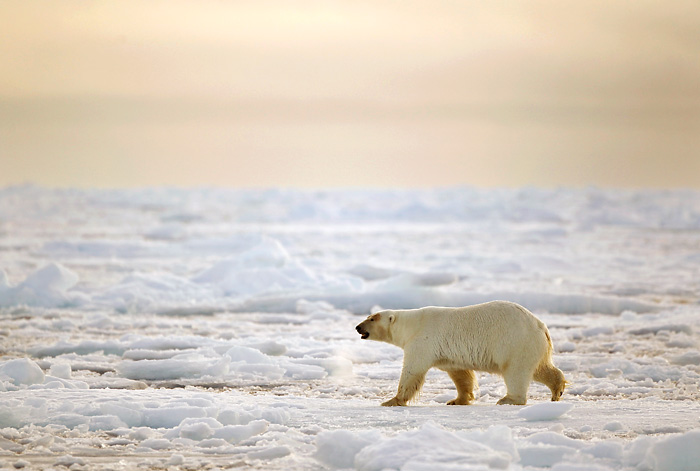 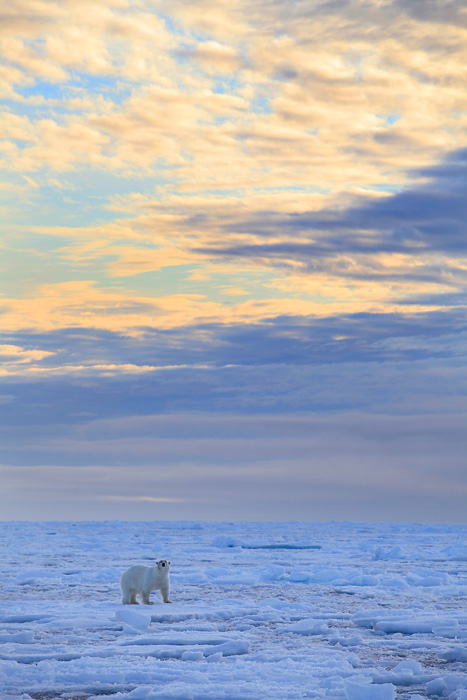 Fog hampered our efforts the following day but long hours on the the top deck searching and peering through the gloom finally produced a bear. It was somewhat wary of the boat but hey it was another sighting so nobody was complaining (well not much anyway!). 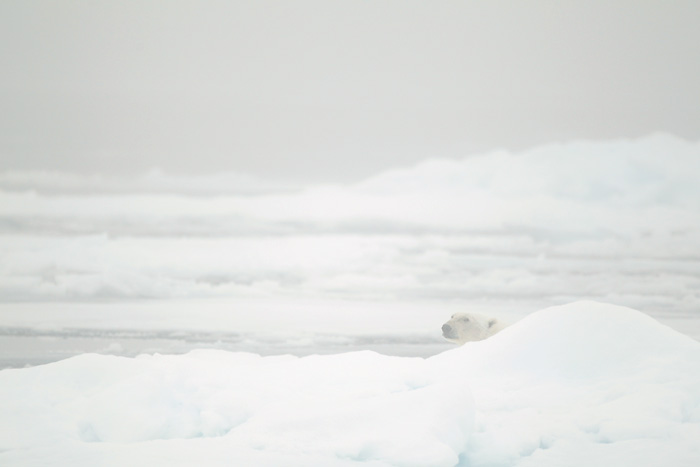 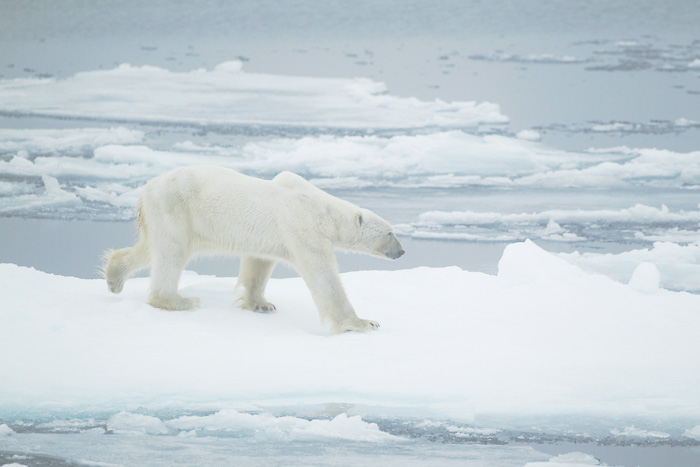 After ‘parking’ in the ice overnight, we had drifted some 6 miles and the ice had fragmented by the next morning. We tried to relocate more densely packed ice without success and so were left with the dilemma of heading much further north to reach the main ice or returning towards land – with deteriorating conditions we decided on the latter and headed off towards the Hinlopen Strait. 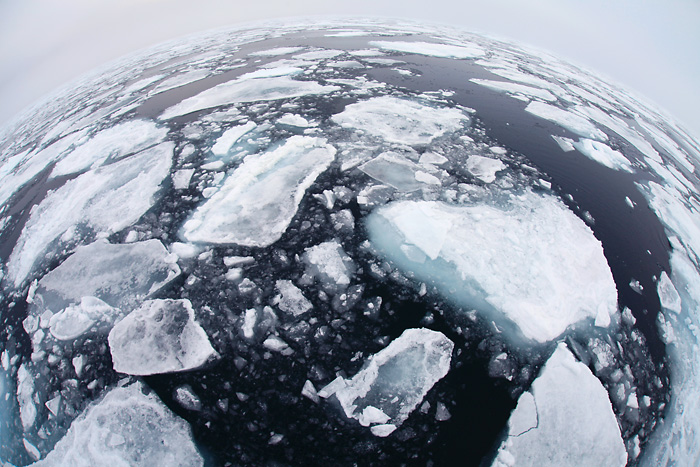 After a detour to take at look at Wahlenbergfjorden we headed further south down Hinlopen to a walrus colony where we set-up close to the water’s edge near to the main colony in the hope of attracting inquisitive individuals keen to check us out. It worked a treat and we soon had what looked like the ‘daddy’ of the colony looming large in front of us. In fact he was keen to demonstrate his not inconsiderable bulk as he lumbered purposely up the beach towards us. We quickly conceded ground and he eyed us somewhat suspiciously from a safe distance before returning to the main colony triumphantly having seen off 12 human wimps! 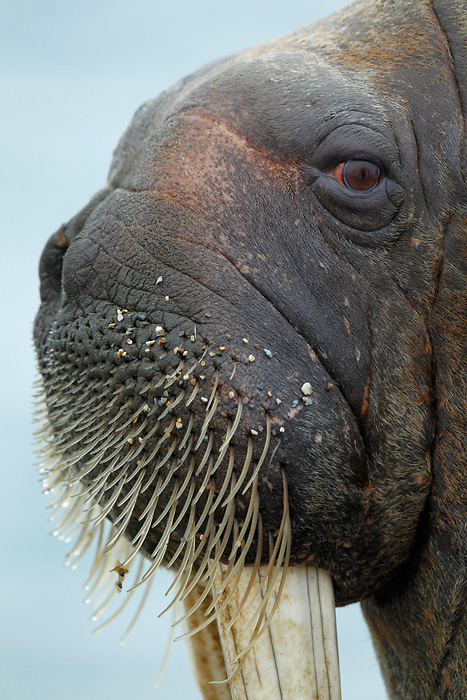 Monaco glacier is one of the most scenic locations in Svalbard and it was here that we headed next, arriving mid-morning and almost immediately spotting a mother polar bear with two half grown cubs in close attendance. They were some distance away but by the time we boarded the Zodiacs after lunch they were moving quickly towards the shore giving us some great views. Living on land at this time of the year must be hard going for bears with little to eat now that the breeding birds had departed and it appeared that they were feeding on the sparse vegetation. 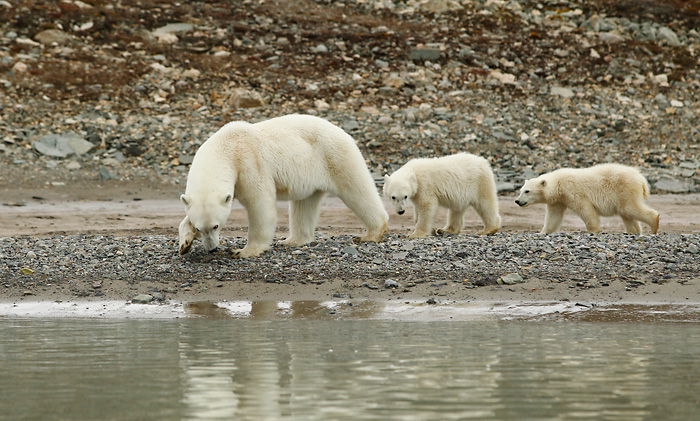 We spent the rest of the afternoon cruising around in front of the glacier searching for seals that might in turn attract a hunting bear. Despite the efforts of my colleague, Pete Cairns to liven things up by accidentally throwing himself out of the Zodiac (after which much hilarity ensued) there was little activity of the animal kind until we spotted a seal hauled out on ice as we headed back to the ship. We made a slow approach to within 30m and then turned off the engine, switching instead to paddle power. The seal, which turned out to be a very handsome bearded seal remained very relaxed and amazingly seemed unperturbed by the volley of motordrives each time it raised its head to look in our direction. In all we were privileged to spend more than 30 minutes in its presence, at times no ore than 7 metres away – a remarkable encounter. 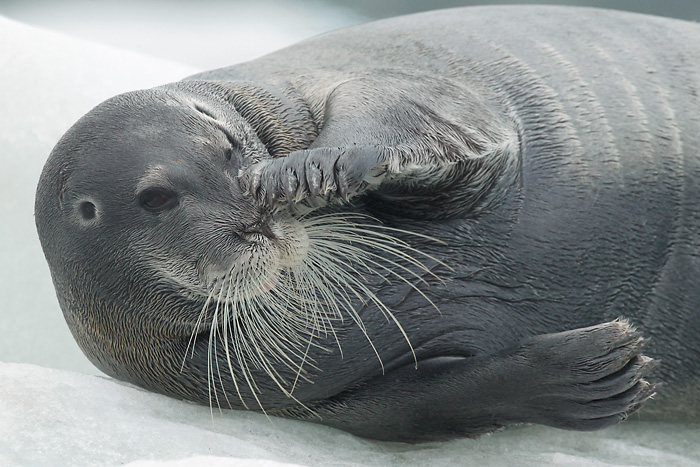 With time slipping through our fingers as it always does we travelled overnight retracing our steps around the north-west corner and then south down the west coast, reaching Kongsfjorden by midday. The approach through Lilliehookfjorden was spectacular with towering cliffs on either side and recently calved blue icebergs from the magnificent 7 km wide glacier at its terminus. 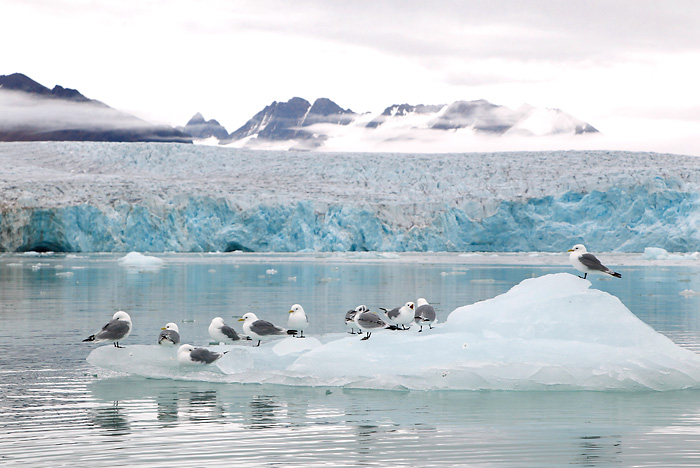 Size and distance are hard to fathom in such a vast landscape and what appears to be a few hundred metres is in fact several miles, whilst the 80m high blue ice that forms the leading edge of the glacier seemed no more than the height of a house. Things changed somewhat once we were bobbing around in a Zodiac which was just a mere speck amongst the floating ice and the power of the ever moving glacier became apparent as chunks of ice the size of several houses fell into the sea below with an accompanying thunderous roar. 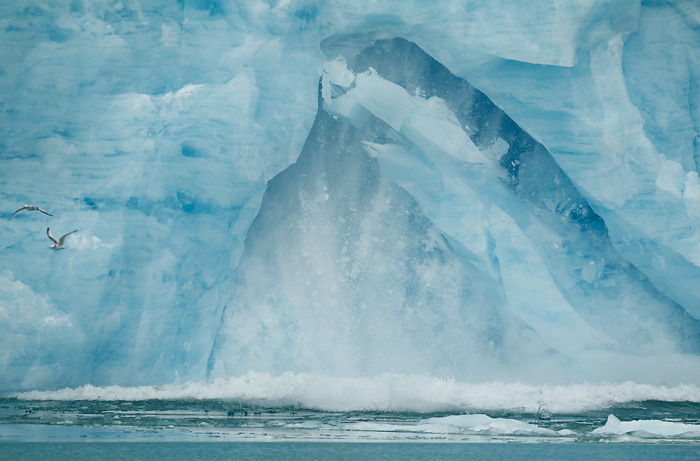 The scenics here were the best of the trip and although the sun alluded us the swirling mist around the mountains provided the atmospheric backdrop to the intensity of the blue ice. We searched in vain for several hours but had little to show for our efforts save for kittiwakes and glaucous gulls. 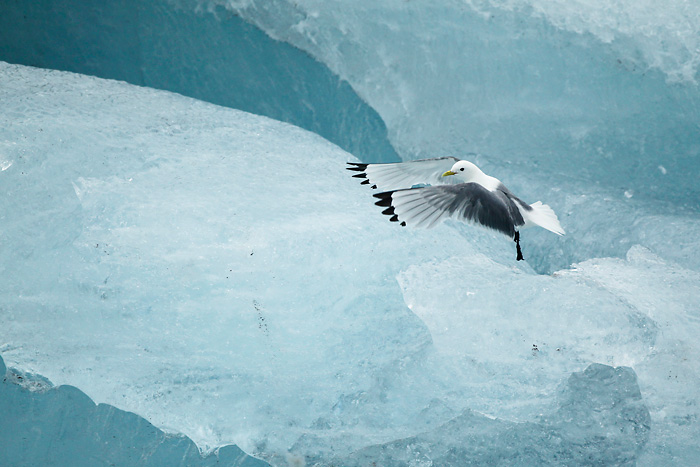 Revived by chocolate brownies we returned to the water and were eventually rewarded with a repeat performance of the day before but this time with a much smaller ringed seal. There were several around and after a couple of fruitless approaches, one suddenly popped up in front of us and slunk out onto the ice to ‘enjoy’ the limelight and the constant rattle of camera shutters. 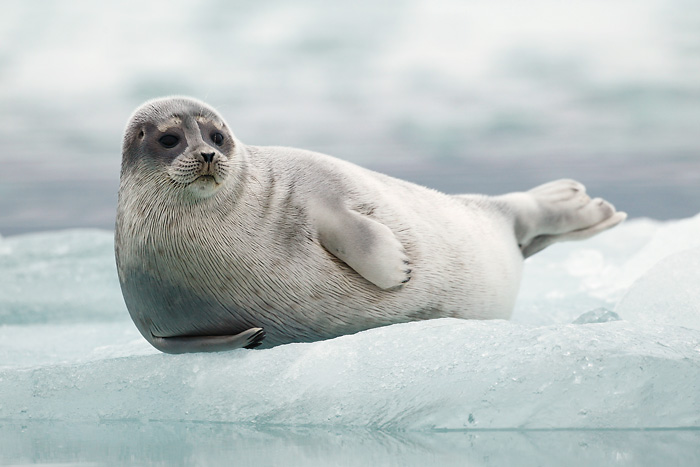 We spent the night anchored a safe distance in front of the glacier and were back out in the Zodiacs at 5am. Conditions were perfectly calm as we searched once more for a dozing seal or polar bear on the prowl. It was not to be on this occasion but was a reminder that here perhaps more than anywhere, wildlife encounters are not around every corner (or iceberg) and that patience and a philosophical outlook are more important than photographic prowess. Qualities that were equally important as I made my way through Heathrow airport the following night but it all seemed a lot less stressful out on the ice. 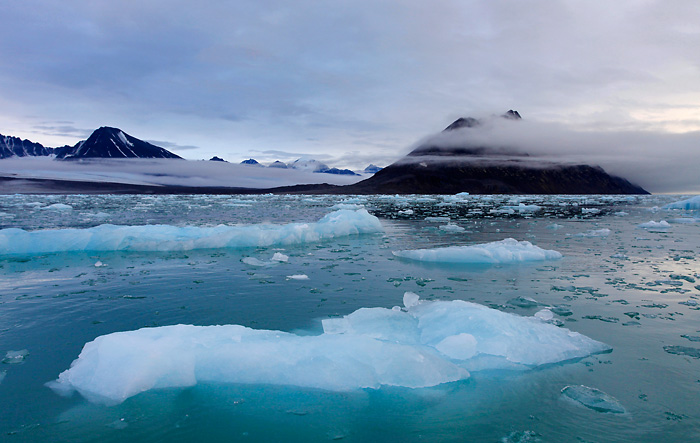 Many thanks to the splendid crew of the Origo and for the entertaining company of the Northshots tour guests. For details of next year’s trip visit www.northshots.com

Did you like this? Share it:
Tweet
This entry was posted in In the field and tagged arctic, ice, northshots, photo tour, photography, polar bear, seal, spitsbergen, svalbard, tour, walrus, wildlife. Bookmark the permalink.