To say I have neglected this blog would be rather an understatement. I could supply a host of lame excuses for the lack of activity but let’s just draw a line under the last 8 months since the previous entry and crack on! This week saw the biggest shift in weather patterns I can remember. From close to 24ºC just 9 days ago and signs of a very early spring here in the Highlands to sub-zero temperatures and more than 15cm of snow! It was of course forecast but somehow after the unusually warm weather of the week before I didn’t really believe it! It started on Monday evening and by Tuesday morning we were plunged back into the depths of winter. The daffs that had been nodding brightly in the sunshine were nowhere to be seen and my hide (set up for nesting jackdaws) looked more like an igloo! 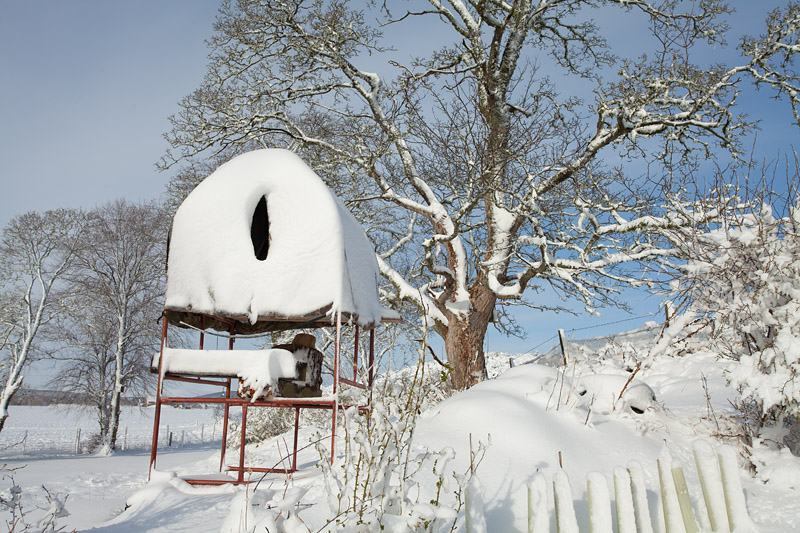 As always happens when faced with snowy conditions, I want to be in 5 places at once but on this occasion I had no choice but to stay close to home as the drive was blocked and my 4WD vehicle had a flat battery! 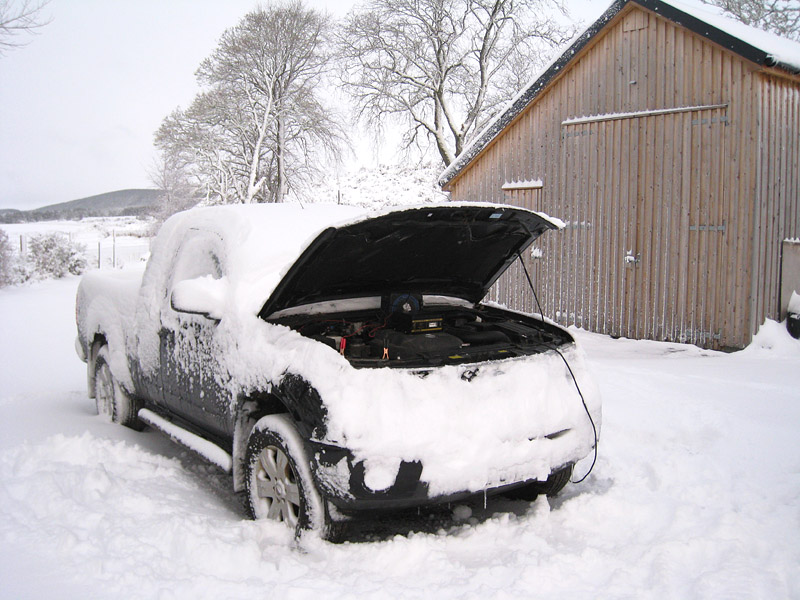 So I got the battery on charge and then spent the morning ‘messing about’ in the garden shooting spring foliage covered in snow – itself an unusual combination and after all I’ve got plenty of cute red squirrels sat in the snow! 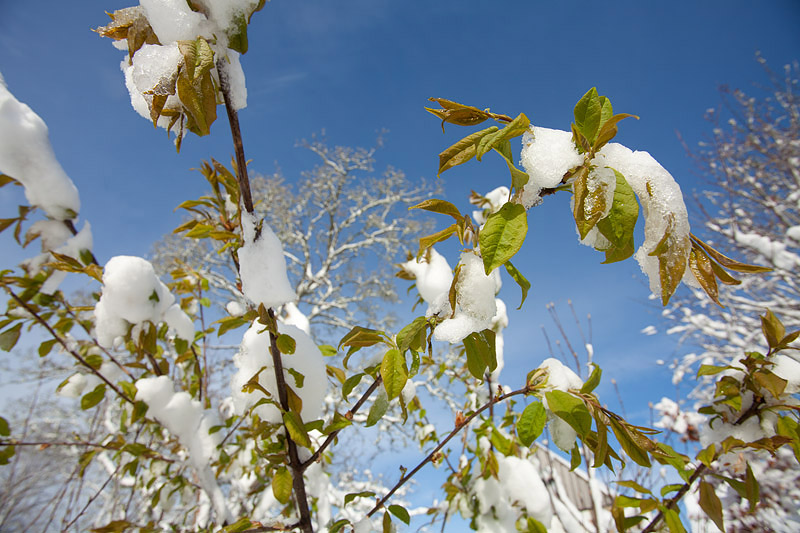 The morning was a mix of sunshine and showers and by the time I got the car started it was snowing again. I had a plan of sorts in mind as I headed out but it was more of a speculative drive hoping to find suitable subjects close to the road in a few of my favourite haunts. The local marsh provided the first opportunity with a buzzard hunkered down in a silver birch before taking flight. 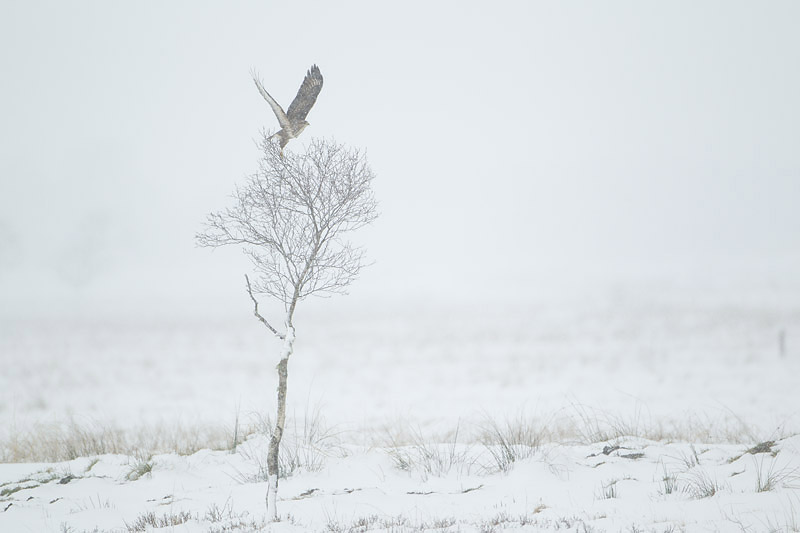 The nearby fields, wet meadows and rough grazing land support good numbers of breeding waders, which have been back on territory for the past couple of weeks but the snow had caught them out as well and they were congregated on any open areas probing around in the wet ground. Seeing groups of curlew, oystercatcher and lapwing on the snow was certainly unusual but most were too far from the road for any decent shots although I had a nice fly by of a group of greylag geese. 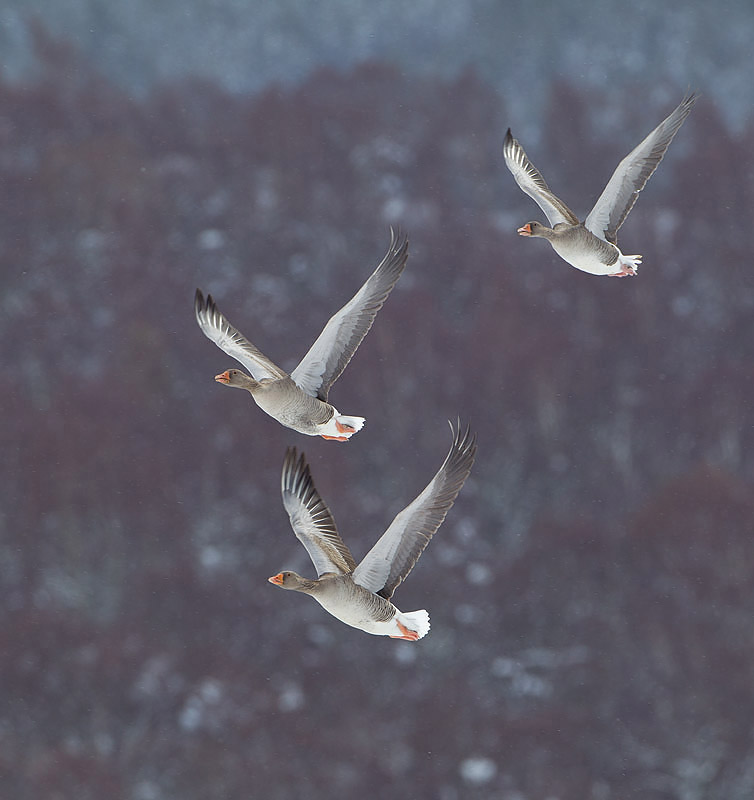 Just out of the village I came across my first spring migrants of the year (in Scotland) – a couple of male wheatears searching for insects along the road and verge, flitting up onto the fence posts and allowing a very close approach seemingly unconcerned. The single track road presented a few problems with other traffic interupting my photography though! 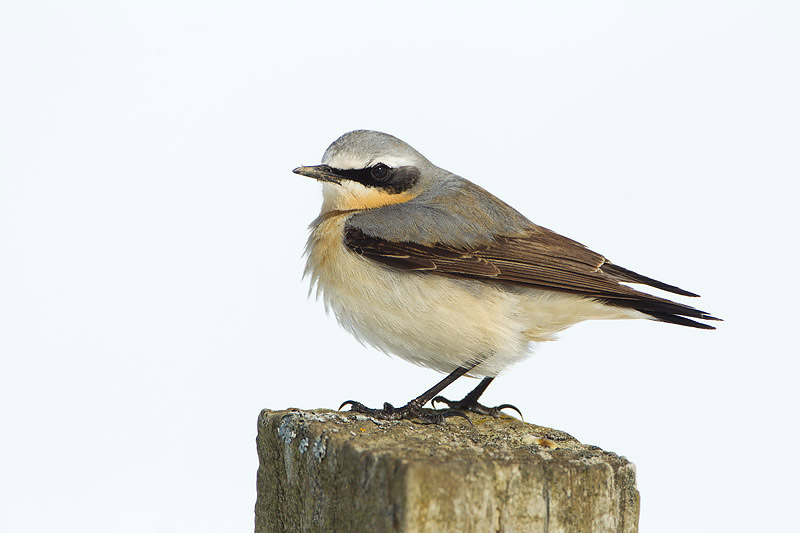 Lapwings were very evident on their traditional breeding grounds but there wasn’t a lot of displaying going on – the weather appearing to have cooled their ardour. Most were seeking out the small patches of exposed ground on the larger expanse of snow, flitting between them in search of food. There was a brief squabble between two males perhaps over territory that I managed to capture – it was an ‘almost shot’ which really needed a turn of the birds heads towards me but there’s not a lot you can do in these circumstances except hit the button and hope for the best. 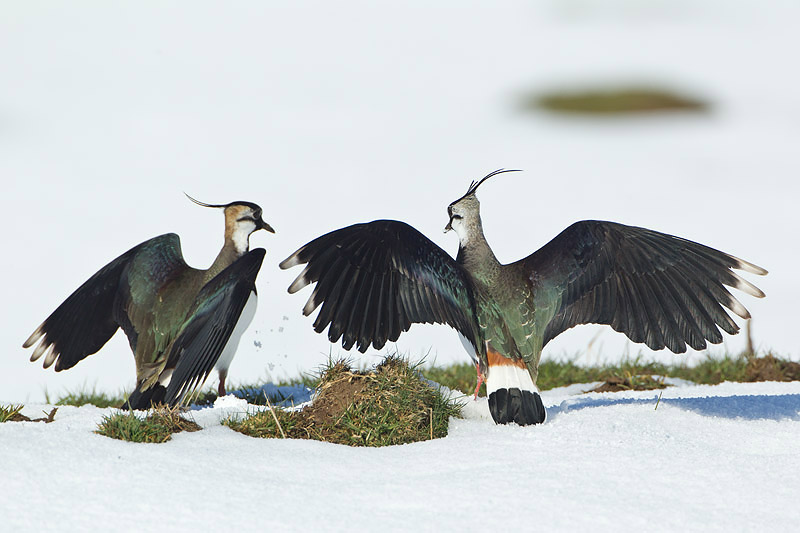 With the fuel tank well into the red I made my way into town stopping briefly to photograph a mixed flock of greylag and pink-footed geese, the latter a on their way further north and much more wary than their near relatives. 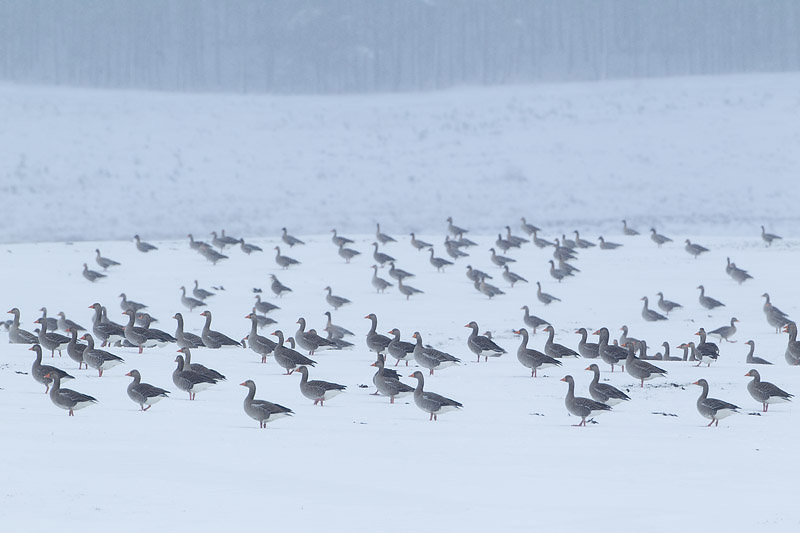 Having been relieved of the best part of £90 for diesel I headed north onto the moors in search of red grouse. I had hoped for a clean carpet of snow on which to photograph the grouse but the earlier sunshine had created a patchwork of small ‘islands’ of exposed heather. The grouse were easy enough to spot on the snow but when tucked in amongst the heather they quickly disappeared. Shooting dark birds on a white background is a nightmare to expose correctly and it’s easy to end up with either featureless underexposed grouse or burnt out snow. 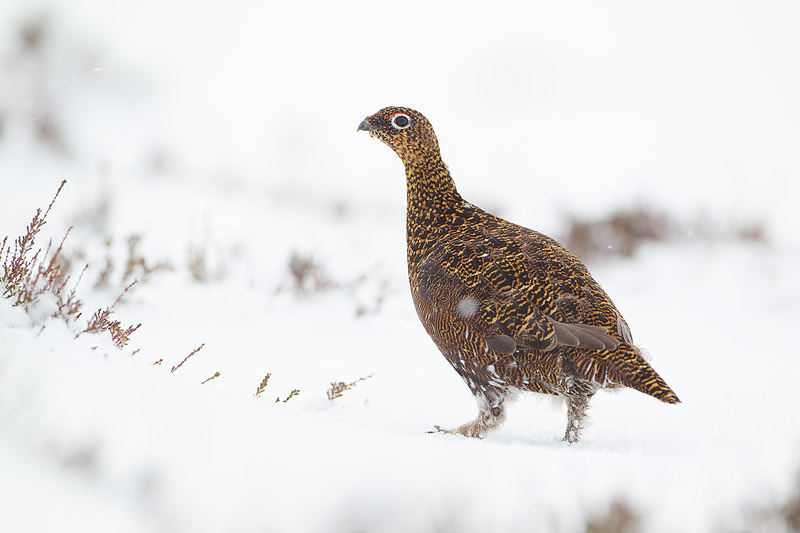 The snow flurries continued for a while and the prospects for any good light looked slim as I continued across the moorland but by the time I reached the main road a strip of blue sky promised a bright spell as the sun dropped towards the horizon. So instead of turning for home I re-traced my tracks hoping for further grouse encounters. All the areas where I’d had success on previous visits were devoid of birds and so I returned to the pair I’d found earlier. They were still close to the road and bathed in late afternoon sunlight. Shooting from the car was awkward but there was little point in trying to get out as this would certainly disturb the birds. So with the gear stick reaching parts I’d rather it wasn’t, I lent across the passenger seat, handholding the 500mm lens at an acute angle to avoid the wing mirror and managed a few shots. The male was walking across the snow moving away from me so I gave my best grouse impression to attract it’s attention, which also prompted it to call back to me. 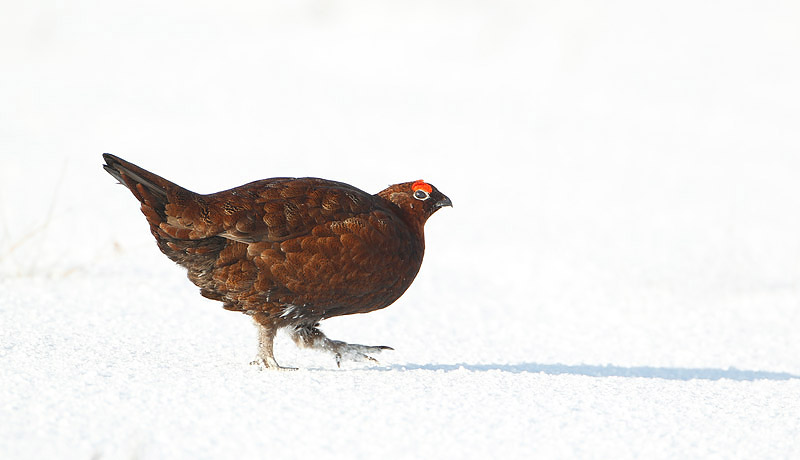 Photographing from the car may not be the truly ‘wild’ experience but it is at least warm and (mostly) comfortable and can, as was the case this week, generate a lot of images in a short space of time. 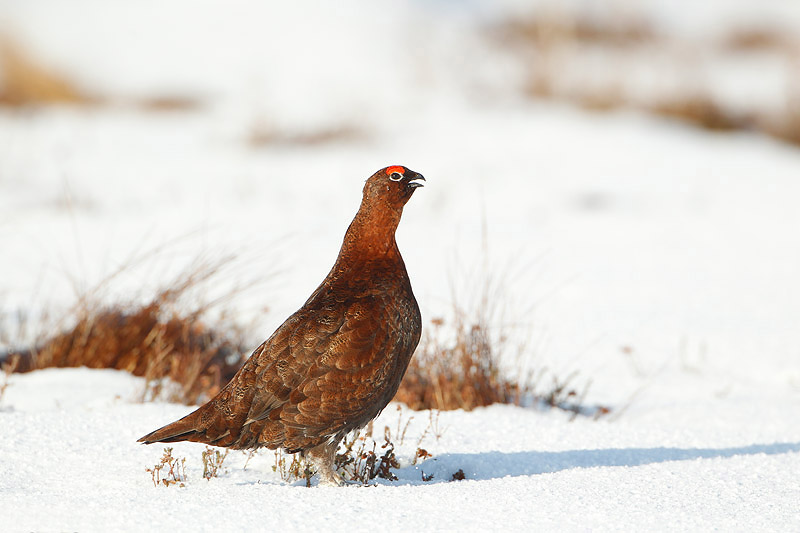 Did you like this? Share it:
Tweet
This entry was posted in In the field and tagged bird photography, local, scotland, snow, winter. Bookmark the permalink.